A Surprise at the Lighthouse 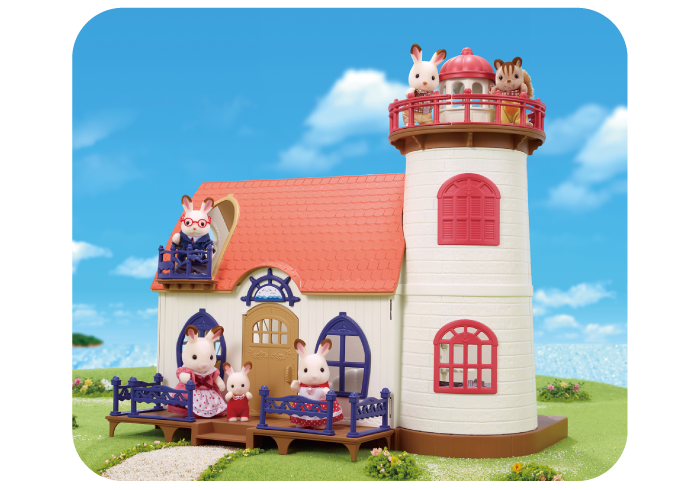 The children in the Sylvanian village had received an invitation from Patricia the Chocolate Rabbit grandmother.
“Come and visit me at the Sea Breeze Cape”, it said.
“I’ll take you somewhere wonderful.”
And so all the children from the Sylvanian village set off for the Sea Breeze Cape.
“Where’s the wonderful place?”
asked Freya the Chocolate Rabbit girl when the children arrived.
“It’s the lighthouse right at the end of the cape”,
replied Grandma Patricia, smiling.
Freya and the other children were very surprised to hear that.

The lighthouse was very old and nobody seemed to use it anymore. But when Grandma Patricia and Rhys the Chocolate Rabbit grandfather led the children to the lighthouse, they got a big surprise! There was now a beautiful lodge.
“The window is shaped like the first boat I ever went on”,
explained Grandad Rhys proudly.
“And the pattern on the balcony fence is of the clouds and seagulls I saw then.”
The lighthouse was full of Grandad Rhys’ memories. 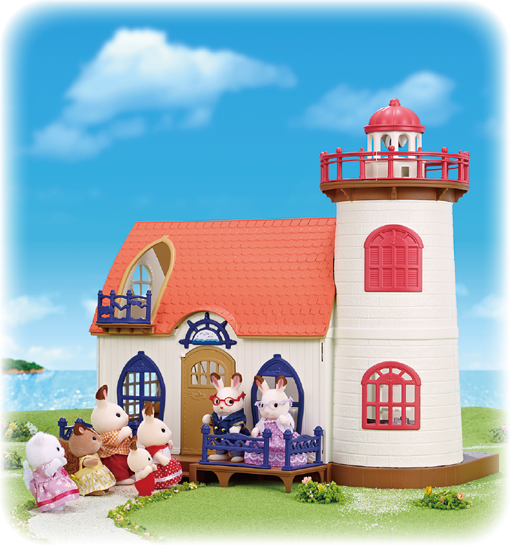 When the children walked inside, Grandad Rhys and Grandma Patricia told them the stories of furniture like the table and sofa.
“Once when I was out on my boat, a storm came”,
said Grandad Rhys.
“I tried to find land, but just when I thought I’d reached an island, it turned out to be a whale’s back!”
“I found a big, shiny, white shell once while I was diving in the sea”,
said Grandma Patricia.
“When I opened it there was all kinds of treasure inside.”
The children sat on the shell-shaped couch, looking at the whale-shaped table and boat-shaped bed as they listened to the Chocolate Rabbit grandparents’ exciting stories.

“At last I reached a deserted island”,
said Grandad Rhys as he told the rest of his story.
“I found my way back to the Sea Breeze Cape by building a hot air balloon from some bits and pieces that I found on the island. This lighthouse showed me the way back.”
Grandad Rhys led the children upstairs and showed them the signal. The babies were delighted.
“Is it true?” asked Freya.
“Maybe!”
replied Grandad Rhys mischievously.

That night, the children stayed at the lighthouse lodge with the Chocolate Rabbit grandparents.
“I’ll show you the treasure”,
said Grandma Patricia after they ate dinner. She led the children up to the top of the lighthouse and told them to look out at the sky. It was full of twinkling stars. The sky looked like a great big treasure chest.
“Wow!” said the children excitedly.
“It’s beautiful!” 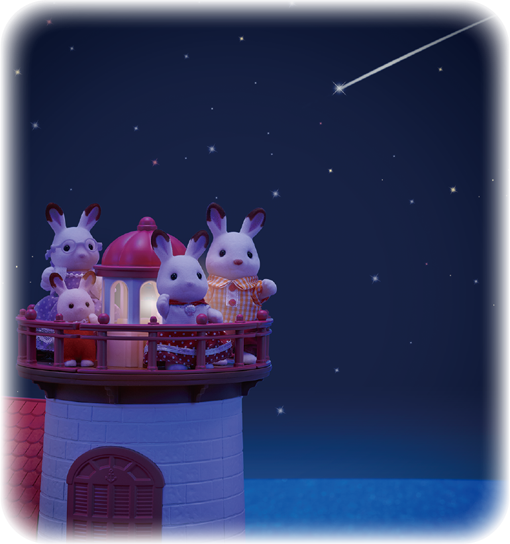 “Wow!”
cried Crème the Chocolate Rabbit baby.
“It’s like a dream!” added Freya.
“Freya!” called Freya’s friends.
Freya could see them waving to her by the light of the lighthouse.
“Wheeeeeee!”
cried Freya and Crème as the flying tricycle flew through the starry sky. No matter how far away they flew, they could see the light from the lighthouse guiding them back. At last they followed the light back to where all of the other children were waiting.