A Shop For Everyone 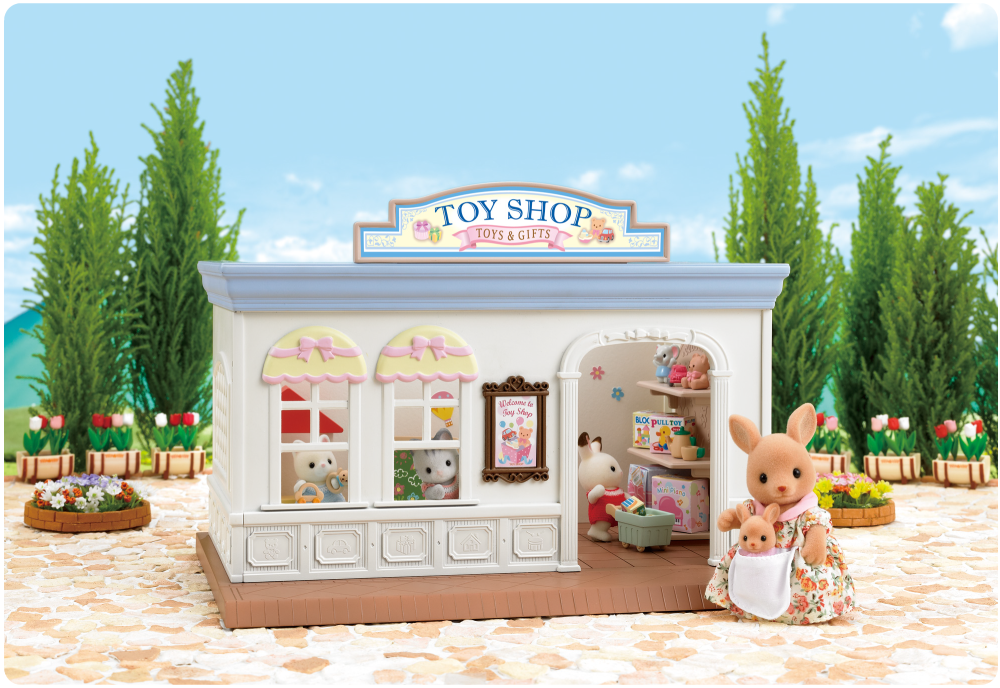 Bruce the Kangaroo father’s hobby was making toys. He made toy cars and toy ships and gave them to the children in the village as presents. The Kangaroo family’s house was always full of children who had come to play with the toys Bruce had made.

Sheila the Kangaroo mother was just as happy about it as Bruce. She loved children and enjoyed spending time with them. So Mr. and Mrs. Kangaroo were very popular among the children in the village. Meanwhile, a wonderful plan was underway in Sylvanian Village. They were going to have a new Supermarket!

There was going to be a Sweets Store next to the Supermarket. The mothers were looking forward to the new Supermarket, and said
“I can’t wait for it to open”.
The babies didn’t know what a supermarket was.
“What’s a supermarket?” they asked Hilda Hamilton the Hamster mother, who was their teacher at the nursery.
“It’s a store that sells everything you could want”, explained Mrs. Hamilton.

The babies were very happy.
“Everything we want?” exclaimed Ambrose the Walnut Squirrel baby.
“It’ll have lots of toys!” said Creme the Chocolate Rabbit baby.
“And lots of dolls and picture books!” added Gilly the Silk Cat baby.
The more they thought about it, the more wonderful the Supermarket seemed. The babies couldn’t wait for it to open! 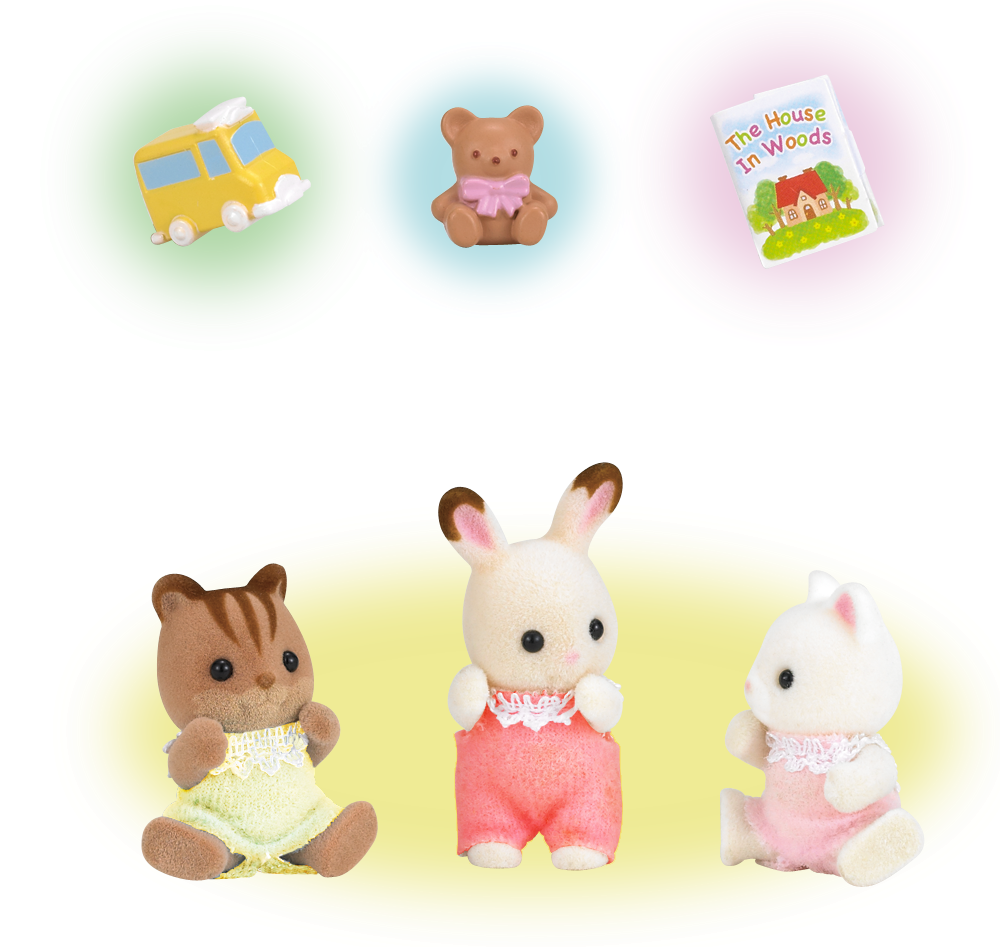 Then the babies had an idea.
“Let’s make our own supermarket!” they said.
They started to put their toys on the table so that they could be shopkeepers too. Just then, Perkin the Grey Cat father walked by. 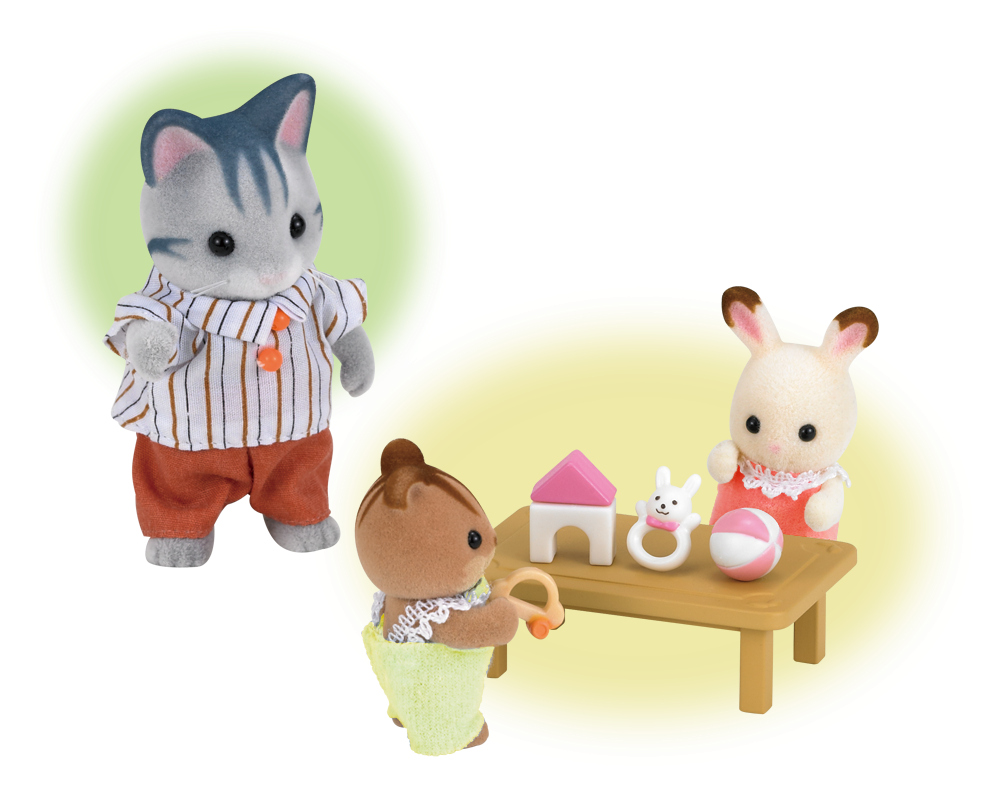 “You look like you’re having fun. What are you doing?” asked Perkin.
“This is our supermarket!” replied the babies happily.
Perkin smiled. You see, Perkin was the shopkeeper of the new Supermarket.

But as Perkin listened to the children's game, he began to get worried.
“There are a lot of toys at the supermarket!” he heard Gilly say.
“It has everything we want!” added Ambrose.
“Oh dear”, thought Perkin.
“They look so happy and excited. They'll be so disappointed when they find out there are no toys at the Supermarket. What am I going to do?”

They decided to open a toy shop right away and sell Bruce's toys there. Sheila, who loved children, would be the shopkeeper.
“We need to sell toys that everyone will like”, she said.
Then Bruce remembered what Perkin had said about how much the babies had loved pretending to be shopkeepers.

“I know!” said Bruce.
“Let’s make a space where children can pretend to be shopkeepers! It would be fun to have mini shopping trolleys just like the real ones in the Supermarket.”
And so a pretend shop was set up in the Toy Shop. At last the big opening day came. The Supermarket, the Sweets Store and the Toy Shop all opened on the same day.

The Toy Shop had white walls, a sky blue roof and pretty shades on the windows. Whenever the mothers in Sylvanian Village went shopping, they took the babies to the Toy Shop and said
“Wait here while I do the shopping.” The babies dashed inside excitedly. 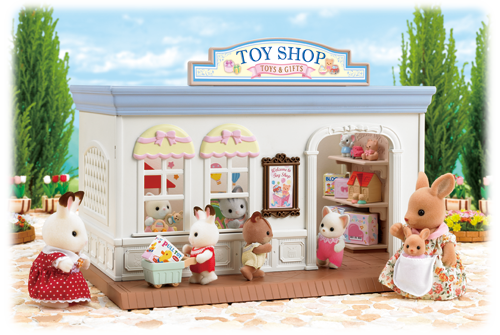 “Come in”, said Sheila.
“Have fun playing with our toys!”
The shelves were filled with blocks, stuffed toys, and hand-made wooden toys. There were dishes for make-believe games, drawing boards, and even musical instruments.
“Wow!” said the children, their eyes bright with excitement.
“There are so many different toys!” They couldn't decide what to play with first.

In the little pretend shop with a red roof, the babies had a wonderful time arranging their toys and pretending to be shopkeepers. Creme pushed a little toy shopping trolley that looked just like a real one.
“I'd like these, please”, said Creme.
“Here you are”, replied Apricot.
“Thank you very much!”

The babies had so much fun that when their mothers came back from shopping, they didn't want to leave.
“We're still playing”, they said.
“You go shopping at the supermarket while we wait!”
Happy laughter could be heard from the Toy Shop forever after.