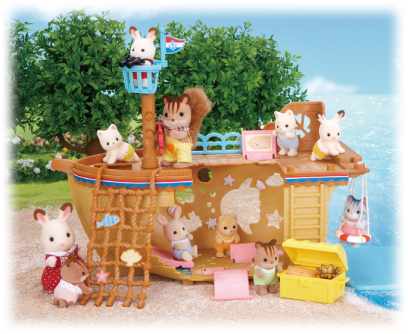 The children of Sylvanian Village went to play at the seaside. They liked to take a boat out to Adventure Island. On the island was a playground with a treasure ship, a whale, and lots of other fun things to play on.

The children kept talking about it even after they got back to the Log Cabin.

“Wouldn’t it be great if that ship could move?” they said. That night, Freya the Chocolate Rabbit Girl woke up. She thought she could hear the sound of waves from the sea.

As she looked around, she realized that she wasn’t in the cabin with everyone asleep any more.
They were on a ship! The ship from the playground had turned into a real ship and was sailing across the great big sea!
Just then, Freya and Gilly the Silk Cat Baby noticed a big treasure chest at the corner of the ship.

They opened it and found an old map inside.
“It must be a treasure map!” they exclaimed.
The children decided to go on a treasure hunt on the ship.
“Off we go!” they shouted. 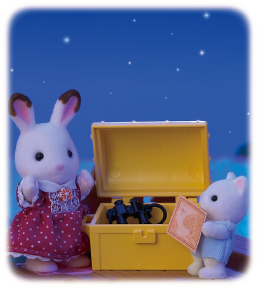 Ralph the Walnut Squirrel Boy took the helm, feeling just like the captain of a ship. Soon Jason the Bear Baby called out from way up on the mast, where he could see a long way away. “There’s an island!” he shouted. On the island, they found a cave with lots of glittering jewels inside! 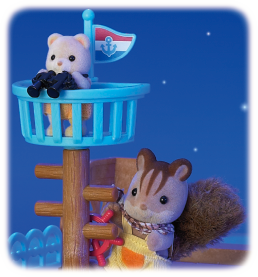 “Wow!” said the children.
“They’re beautiful!”
They noticed that the jewels were shaped like the holes on the side of the ship. When they returned to the ship and fit them into the holes, the ship started to shine and suddenly floated up into the sky!
“We’re off on a trip into the sky!” they cheered.

As if the ship had heard them, it started to fly rapidly.
Suddenly, the ship swayed and Jason came tumbling down from the mast.
“Careful!” called the children.
But the whale from the playground flew up and caught him!
“Phew!” said the children.
“I didn’t know that whale could fly too! Let’s fly together!” 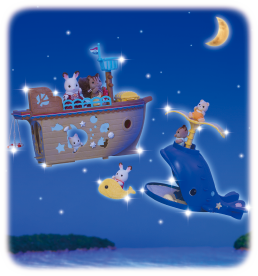 But just as they exclaimed that, they all woke up back in the cabin.
“Was that a dream?” they wondered. But then when they returned to the playground and looked at the ship, they saw the same jewels on it!
“Hurray!” they cried excitedly.
“It wasn't a dream!” As they all looked at the ship and the whale, they said,
“Let's go on another adventure some day!”