The Chocolate Rabbit, Walnut Squirrel, and Silk Cat families have come to stay in a cottage by the sea. Even after playing all day in the sea, the children still enjoy taking a bath and cooking the fish they have caught on the barbeque. When they climb into their hammocks at night, they have had so much fun that the last thing they want to do is sleep.

Late one night, Freya the Chocolate Rabbit Girl, Ralph the Walnut Squirrel Boy, and Tiffany the Silk Cat Girl went out onto the veranda and looked up at the sky.
“It’s so beautiful!” said Tiffany as she stared up at the stars spread across the whole sky.
Just then, they saw a huge shooting star come falling towards the beach.

“I’ve never seen a shooting star that big before!” said Ralph.
“Let’s go and try to find where it fell tomorrow”.

Ralph just loves extraordinary things. The next morning the three set out for near where the shooting star landed.
“It came down around here”, said Ralph.
“Maybe it was a real star”, said Tiffany.
Just for fun, they searched around and looked behind a small rock. There they had a big surprise!

Behind the rock was a pile of glittering seashells. Ralph and Tiffany were delighted at what they had found.
“They’re beautiful! Just like little pieces of star!” 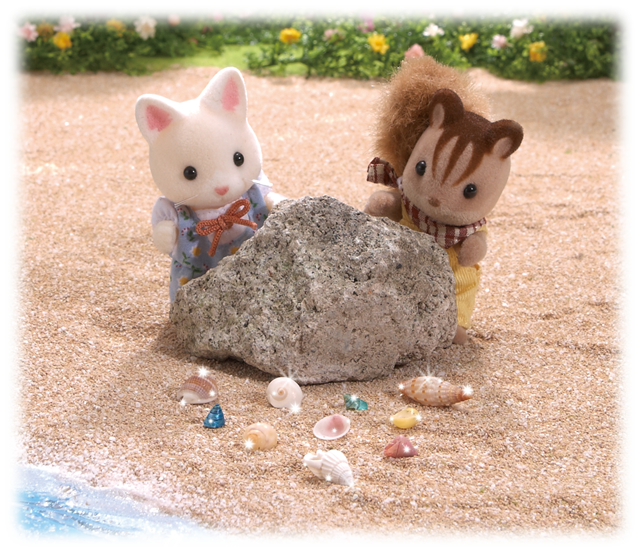 “Look at them all! It’s amazing they all fell together! Maybe the shooting star was showing us the way to this treasure?”
Freya, however, watched them in silence. The seashells were ones she had collected the day before. They were in the way while she was swimming, so she put them there for safekeeping.

But Ralph and Tiffany were so excited that she simply didn’t have the heart to tell them. So she just watched as Ralph and Tiffany happily filled their pockets with the shells, and wrapped up the rest in their handkerchiefs. “That shooting star brought us an unexpected gift”,
she thought, smiling to herself.

When they got back to the cottage, Ralph and Tiffany said to the babies,
“we’ve got something exciting to show you!” and they told them all about how they found the seashells.
“When the shooting star fell, it told us where we could find treasure!”

“These shells are like little pieces of star!”
The babies were very excited. “We want Treasure! We want treasure!” they shouted excitedly.

“Well then, you’d better stay awake and watch for a shooting star tonight”,
said Ralph and Tiffany. This sounds like trouble...
“Oh no! There aren’t any more shells behind the rock”, thought Freya.
“The babies are going to be very disappointed”.

So she snuck out to the beach by herself, found more shells and piled them behind the rock.
“I’ll watch for shooting stars”, she told the babies that night.
“You can all go to sleep”.

The next morning when the babies woke up, Freya said,
“A shooting star fell last night!” and took them out to the beach.
“Was it around here? Or maybe over there?”
She began searching among the rocks.
“We’ll look, too!” said the babies and toddled happily around.
Soon, Ambrose the Walnut Squirrel Baby found the shells behind the same rock.

“Look! Lots of treasure!”
Creme the Chocolate Rabbit Baby and Gilly the Silk Cat Baby gathered round. They were all delighted to find their treasure. Watching them, Freya smiled happily.
“That shooting star really did bring gifts”, she said.
The shells Freya spent so much time gathering became souvenirs of the seaside holiday for everyone.

The story soon spread around the village, and now all the children say,
“When you see a shooting star by the sea, it’s telling you where there’s treasure”.
Whenever she hears this, Freya feels happy but just a tiny bit embarrassed.