The Supermarket is Very Busy! 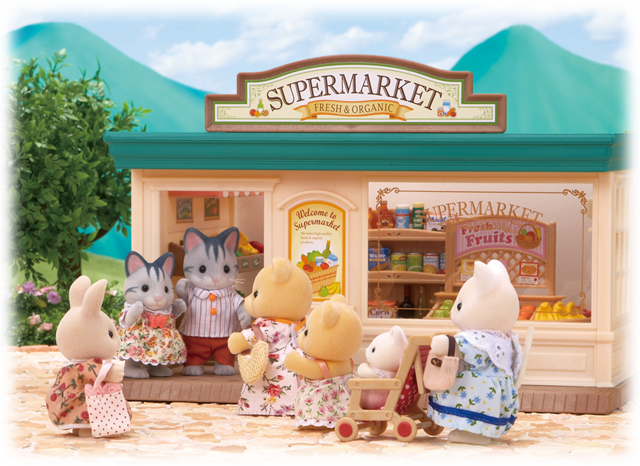 The Calico Critters Village Supermarket is always full of delicious food. The owner, Sam The Fisher Cat Father, is famous for finding good things to eat. One day Sam hears about some very rare and good-tasting mushrooms, and he decides to go out into the mountains.
“I won’t be back till late,”
he tells Linus the Fisher Cat Boy and Lauren the Fisher Cat Girl.

“Look after the store for me today.”
Hearing this, Bell the Hopscotch Rabbit Girl and Dominic the Hazelnut Chipmunk Boy put up their hands.
“We’ll help!” they say.
They’ve always wanted to help in the supermarket. After Sam has gone, Holly the Silk Cat Mother comes to the supermarket. 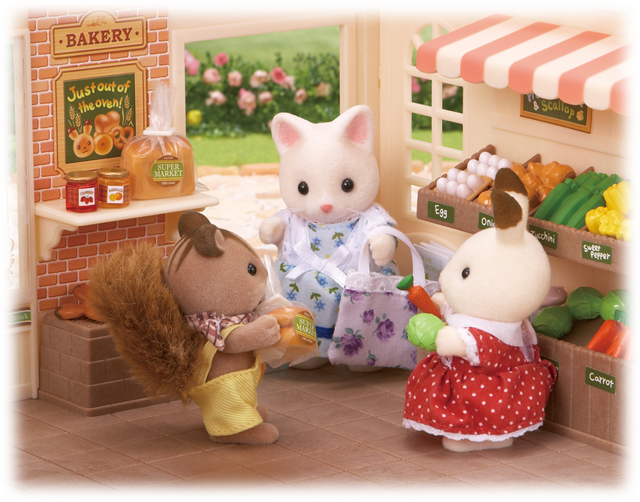 “Welcome!” shout Bell and Dominic. As Holly looks around the store, they race ahead.
“How about some nice, fresh vegetables?” says Bell.
“The bread is fresh-baked, you know,” says Dominic.
Holly goes home with her arms full of groceries.

Now Hilda the Hamster Mother comes in with her twins. She is having a hard time carrying things while she pushes their baby carriage. Dominic has an idea.

“I know! I’ll deliver the things she buys for her!”
As a squirrel, Dominic is quick and active, so this is perfect for him.
“If you buy from me, I’ll deliver everything for you!”
“Yes, please!” say the customers, and they come over to Dominic.
“That was a great idea!” says Dominic, who is now very busy.

Bell, on the other hand, thinks, “I like cooking, so I’m going to use that to advertise.”
She decides to use food from the supermarket to make sweet things to eat, and to have the customers taste them. Set out on the counter are pies and other delicious-looking things.
“Please try them,” says Bell.
“They’re all made with food from this supermarket.” 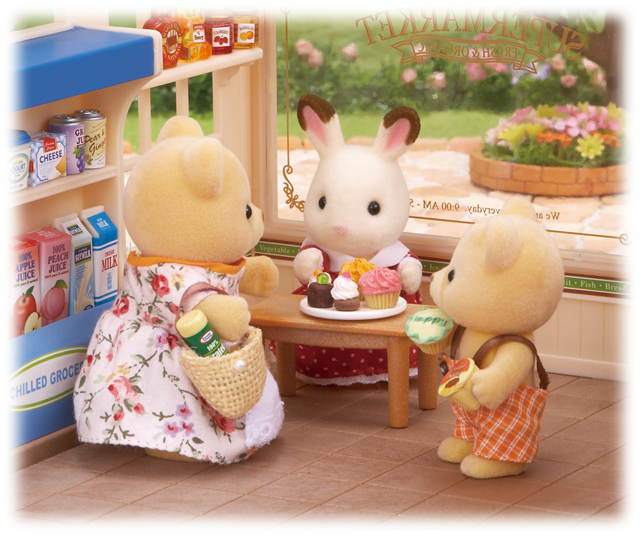 Soon the supermarket is filled with customers, and Bell is busy cooking.
“Hurray, I win!” she smiles as she bustles about. So at first the two are doing very well indeed.

But after a little while, Dominic has so many things to deliver that he starts to get confused.
“Let me see...carrots for the Milk Rabbits, corn for the Chihuahuas...what else was there?”
The Bears get fish when they were expecting potatoes, and the Red Deers only get one of their tomatoes. There are more and more mistakes like this, and finally Dominic cries, “I can’t do this!”

Meanwhile, everyone is pleased with what Bell has made, but she’s used up all the ingredients, and there is nothing left to buy for the customers who ask for them.
All she can say is,
“I’m sorry, we’re all sold out,” and send them away empty-handed.

Dominic and Bell have tried too hard, and all they’ve done is cause trouble. Late that afternoon, as they are cleaning up, Bell and Dominic apologize to Linus and Lauren.
“We shouldn’t have tried to beat each other,” says Bell.
“I’m sorry we caused so much trouble,” says Dominic. 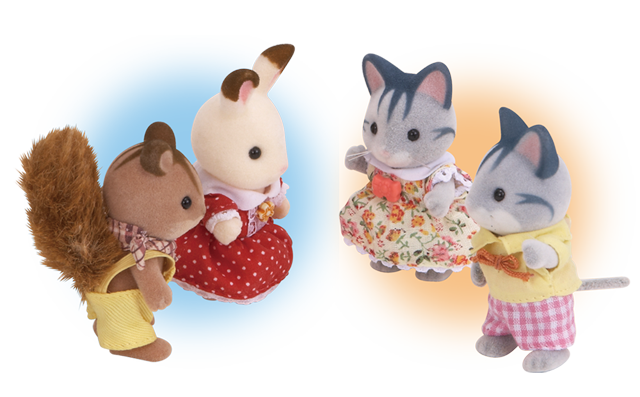 “That’s all right. You both tried really hard,” say Linus and Lauren, trying to cheer them up, but it doesn’t help.

“Helping out in the supermarket was a big mistake. They’ll never let us do that again,”
Bell and Dominic think sadly as they go home. But the next day Lauren has a surprise for them. She tells them the supermarket is filled with customers wanting their groceries delivered, or hoping to taste the food there. Bell and Dominic’s ideas for tasting and delivery are a big success.