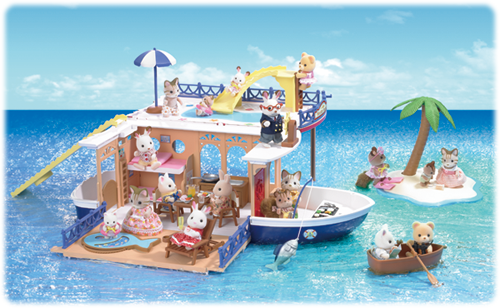 Everybody from Sylvanian Village went to visit the Sea Breeze Cape.
“I’ll take you to a fun little island on my cruiser”, said Rhys the Chocolate Rabbit Granddad, who was the captain of the Seaside Cruiser.

“All aboard!” called out Shane the Striped Cat Boy enthusiastically. A fun day had begun.

The destination of the cruiser was a small island that Rhys called Starry Island because of the star-shaped sand on the beach there.

When the cruiser stopped at the island, the children slid down the slide into the sea one after another, making a big splash as they landed.

Shane was allowed to take the helm of the now-stopped cruiser and pretend to be the captain. He was so proud! There were a lot of fun things to do on the cruiser. 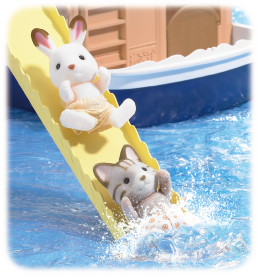 Saffron the Walnut Squirrel Girl and the babies started playing in the pool on the deck.
“Look, Saffron, look!” called the babies.
They took turns sliding down the slide and having fun in the pool. 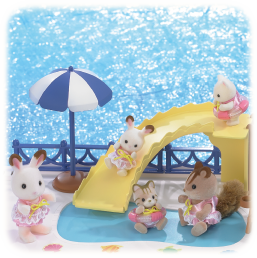 “We’ve got one!”
cried Ralph the Walnut Squirrel Boy and Coco the Chocolate Rabbit Boy as they caught a big fish with Granddad Rhys. They had a barbecue for lunch. They grilled the fish on the deck of the cruiser and laid out tables and chairs under the shade of the palm trees, making the island into a fashionable little restaurant. 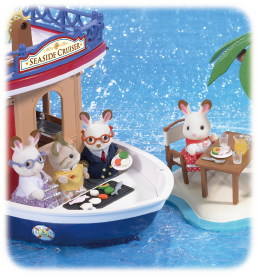 In no time at all, their happy day was over and it was time to go home. As Sabrina collected some star-shaped sand to take home, she found something shiny in the sand. It was a small glass bottle. She took it to the cruiser and looked at it carefully. Inside was a roll of paper!
“What does it say?” she wondered. 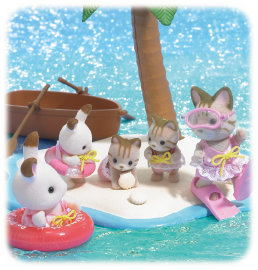 The other children surrounded Sabrina curiously.
“Hmm”, she said.
“It says, this is the clearest sea I’ve ever seen?.”
The message seemed to be about somewhere on Adventure Island.
“Let’s go and explore this place next time!” said Granddad Rhys.
The children were delighted.
“Hurray!” they exclaimed.
“Let’s go and do a lot of exploring on the cruiser!”