Welcome to the Party!

Freya the Chocolate Rabbit Girl won first prize at the Sylvanian Village school art contest. “Congratulations, Freya!” said Ralph the Walnut Squirrel Boy. He was very happy for her, and had a wonderful idea.
“I know!” he said,
“let’s have a party at my house to celebrate!”
Freya is very good at entertaining her friends, and she always has wonderful parties for them.

Ralph wanted this party to be a way of saying thank you to her. He decided to make all the different things that she likes and put them all around his house. As it happens, Ralph’s father is famous throughout the village as an inventor. He is always thinking up new devices and machines that everyone enjoys. Ralph wants to imitate his father so that he can make Freya happy.

His friends all think this is a great idea.
“When she comes in, we’ll have a light shine on her”, says Ralph.
“Wouldn’t it be nice if flower petals rained down on her?” says Tiffany the Silk Cat Girl.
“How about having a plate on the table move, and bring the cake towards her?” says Oliver the Buttermilk Rabbit Boy, and the children keep having more and more ideas.

Then they all go to work moving the furniture and setting up the house for the party. When everything was ready, it was time for a test run. But… 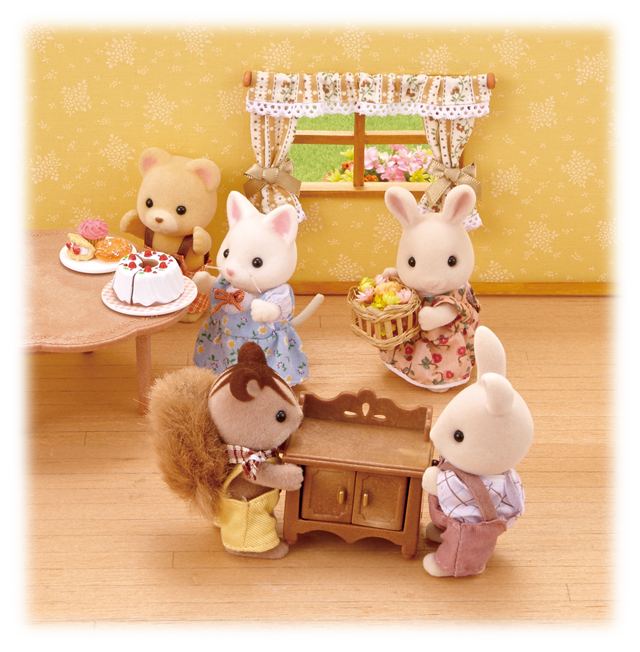 “First, when Freya comes in here, the light will shine on her”, says Tiffany, but when she opened the door, nothing happened. They waited for petals to come floating gently down from the ceiling, but instead a lot of flowers fell suddenly from above their heads, and nobody could see anything.

The plate on the table was supposed to move slowly and bring out the cake. But instead it moved too fast, throwing the cake through the air which landed on Rebecca the Buttermilk Rabbit Girl, covering her in cream.

A light flicked on in the corner of the room, revealing Jack the Bear Boy stuffing candy into his mouth.
“Nothing worked as it should!” wailed Ralph. Everyone was so disappointed. 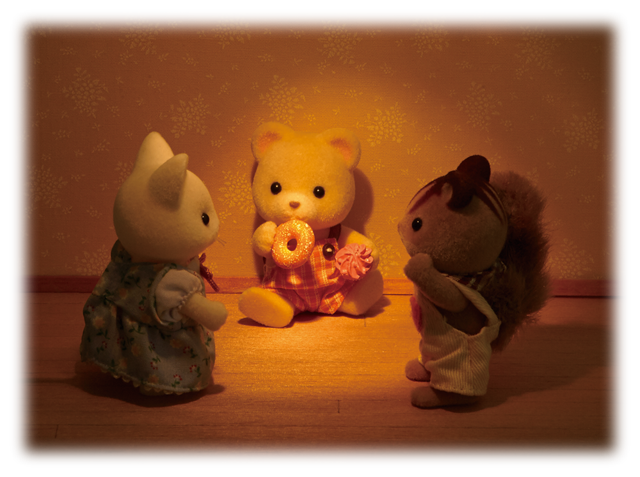 Just then, Freya came through the door.
“I heard that everyone is here getting ready for the party”, she said.
“Can I help?”
But this was supposed to be a surprise party for her.

“No, no, we’re fine!” said Ralph, hurriedly.
“But everyone is here helping...”
“We can do it by ourselves”, said Ralph.
“Well, all right then”, said Freya sadly as she turned to go, looking lonely as she walked away by herself.
“Oh, I wish I hadn’t said that”, thought Ralph.
“Freya is going to think she’s being left out, 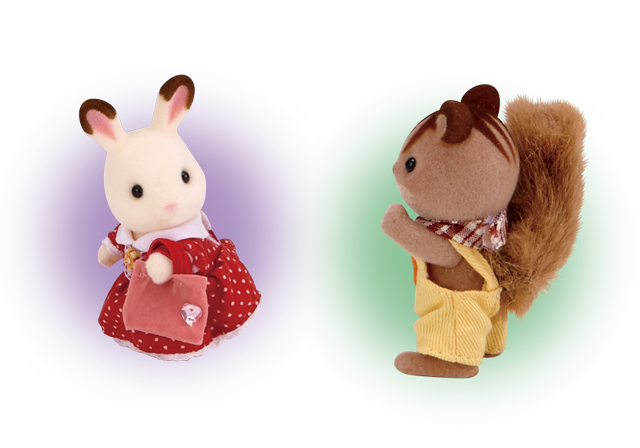 and she might not want to come to the party. What can I do to make her happy now?”
He thought hard about what to do, and soon he had another idea. He got everyone to help gather lamps from all over the village. The time rolled around for the party to begin, but just as Ralph had feared, Freya didn’t feel like going.

Tiffany went to pick Freya up at her house, and when Freya opened the door she got a wonderful surprise. A beautiful row of lights led from Freya’s house down the street and into the distance. Ralph and his friends had lined up all the lamps they had collected along the road.
“That’s so beautiful!” exclaimed Freya.
Freya and Tiffany followed the line of lamps to Ralph’s house, which was all lit up.
“I’ve never been led anywhere so nicely before”, said Freya happily. 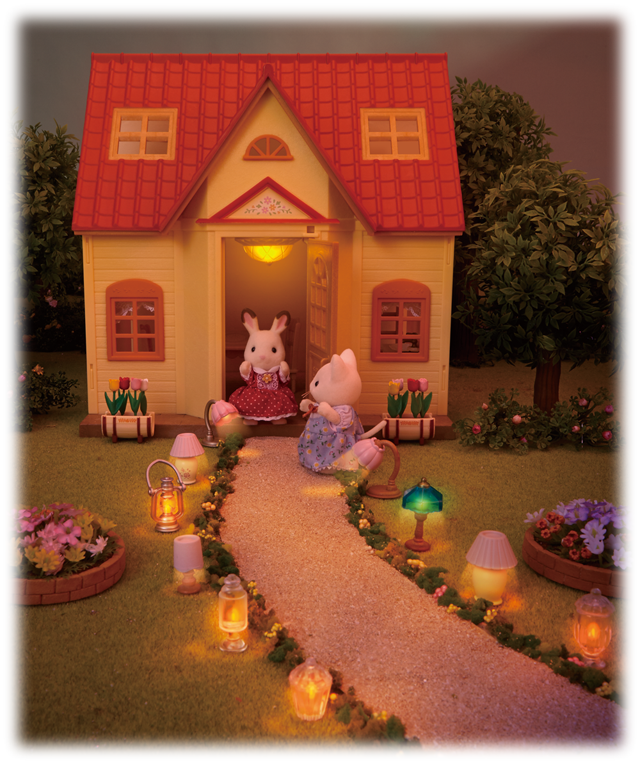 But the surprises were not finished yet. As soon as Freya opened the door, all the lights went out making the room pitch black. A second later a spotlight came on, shining only on Freya.
“Congratulations on winning first prize at the art show!” everybody cheered.
Freya was so delighted and surprised. The lights went on as petals came floating down from the ceiling.

All of Freya’s friends were on the balcony above, smiling and waving to her. The plate on the table began to move, carrying a big cake with a picture of Freya on it. This time, all of the surprises that Ralph and his friends had devised worked perfectly.

But it’s not over yet.
As soon as Bell opens the door, all the lights go out, leaving all in darkness. And then in the next second a light comes on, shining on Bell alone.
“Congratulations on winning first prize at the art show!”everybody calls out.
Bell is surprised. The lights go on, and now petals come floating down. On the balcony above are all her friends, smiling and waving. On the table a plate starts to move. On it is a big cake, with a picture of Bell carved in it. This time all the things Dominic and his friends have devised work perfectly.

“I’m really sorry about the other day”, Ralph said to Freya.
“We wanted to get everything ready without you knowing”. Freya was deeply moved.
“This is wonderful!” She said. “Thank you all!”
And so the party began at the Beechwood Hall.